The West Bank from Jerusalem: traveling through Palestine 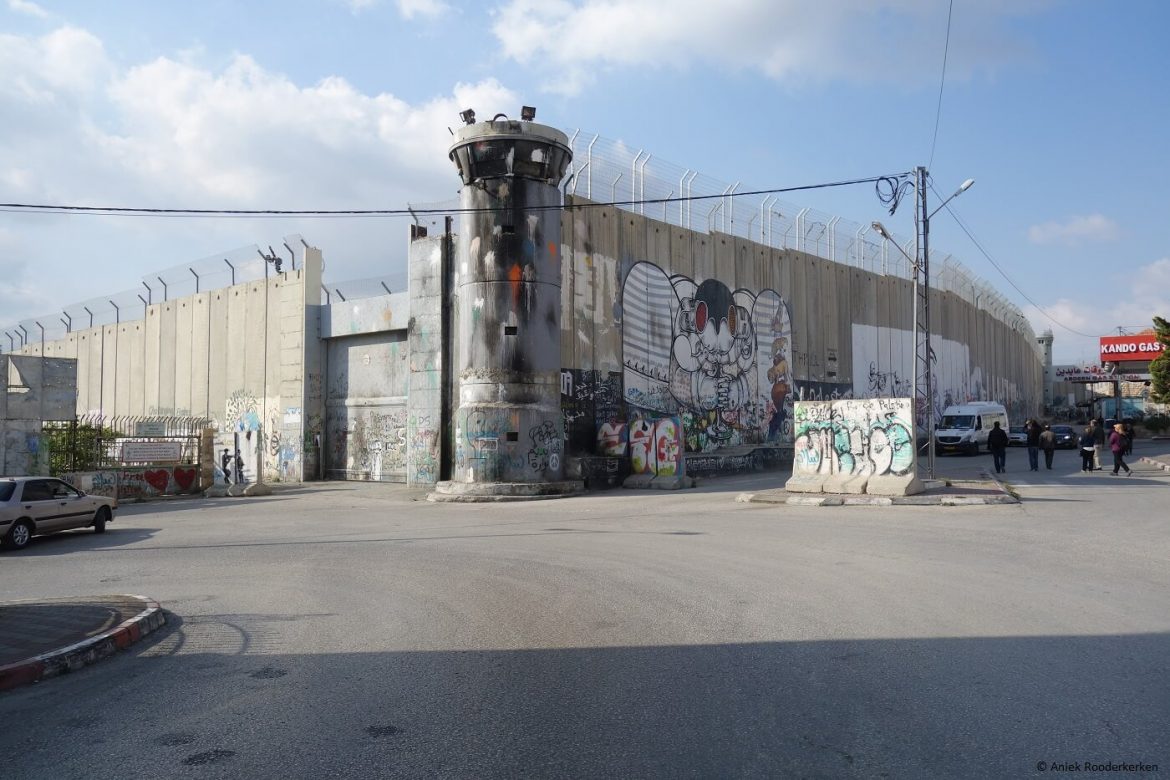 Checkpoints, occupied territory and military personnel. A little glimpse into the Israel–Palestine conflict. But also the Biblical places of Bethlehem and the site by the Jordan River where the baptism of Jesus took place. I visit the West Bank from Jerusalem and discover the vibrant city of Ramallah and the ruins of one of the oldest cities in the world, Jericho. A trip on the West Bank from Jerusalem!

The West Bank together with the Gaza Strip forms the state of Palestine. Since 1967 the area has been occupied by Israel militarily. It is not the first travel destination that comes to mind. Maybe not even the second, third or even the tenth. Still, my trip with Abraham Tours (The Best of the West Bank Tour)  gives me a better picture of the conflict between Israelis and Palestinians, but also of life in Palestine, and points out the beautiful and historic places in Palestine. For this reason alone, when you travel to Israel, you should also go to Palestine.

We leave from Jerusalem with a small group. We’re all sitting in the coach in silence, not quite knowing what to expect. After about half an hour the coach stops at a random point along the highway. The man entering the coach introduces himself as Don Tamer Halaseh, our Palestinian guide. He immediately explains why he had to be picked up at a seemingly random location. He can’t enter Jerusalem or cross the other side of the West Bank. Because he is Palestinian. As tourists, with our passports, we could easily cross the border without any stop at the checkpoints.

Jordan River: the place where Jesus was baptized

Through the desert landscapes and hills we drive to Qasr-el-Yahud, on the Palestinian bank of the Jordan. The river over here is more like a narrow stream, a few meters wide. This is the site by the Jordan River where the baptism of Jesus by John the Baptist took place. Nowadays it is surrounded by fences, barbed wire and bright yellow warning signs for roadside bombs. Around us Israeli soldiers are at the ready with their machine guns.

While Don Tamer Halaseh tells us about the biblical importance of this place, a number of people is baptized in the holy water. Next to the river, some people in white robes are patiently waiting for their turn. Others walk across the marble staircase leading to the Jordan, the tears running down their cheeks.

Jericho: the oldest city in the world

A few minutes drive from the Jordan River and near the Dead Sea is an archaeological site to die for: Jericho. It is considered one of the oldest cities in the world, perhaps even the oldest city in the world.

We explore the excavations of Tell es-Sultan, the ancient city of Jericho where archaeologists have uncovered thousands of years of civilization. As we walk towards some stray dogs lying in the sun, local guide Achmed tells us how Jericho would have been the first place where man began to build a modern civilization and where the first agriculture came into being. The area has been inhabited for 11,000 years! Can you imagine! During excavations, 23 layers of ancient civilizations that over the years have been built on top of one another, have been found deep in the ground. Without a guide you would understand little about the enormous significance of this area.

The city originated around a well, wish now is the Elisha Spring Fountain. The biblical prophet Elisha would have made the salty water drinkable. It is not the only story from the New Testament that is linked to Jericho. According to Luke, Jesus would have visited Jericho several times. One of these times Zacchaeus would have climbed a fig tree to have a better view of Jesus walking though the crowd. The allegedly same fig tree can still be found in Jericho. You can take this with a grain of salt, but still. High above the old city you see the Mountain of Temptation, another reminder of the New Testament.

Our next stop is Ramallah, the city that is considered the unofficial capital of the West Bank. On our way here we drove via countless hairpin bends through the mountains, past Bedouins living in the mountains. What a contrast with this lively, modern and chaotic city full of people and cars.

Together with our guide we walk through the busy market where you can find the most amazing fruits, vegetables and herbs. The market of Ramallah is full of colors and scents. Dirty, noisy but colorful. People are crawling around like ants in an anthill. Children with small carts run across the market, screaming, so that you can jump away at the last second. You have to be able to appreciate the chaos but if you do so the market is a wonderful place to walk around and where, according to Don, you can see the real Palestine.

Where other places in Palestine are crowded with tourists, it seems like we are the only visitors over here. But the advantage of a city that is not aimed at tourists is that you are not treated as one. No vendors who rush straight at you, like at the souk in Jerusalem. On the contrary. At one stall I get a mandarin. A salesman with a cigarette in his mouth beckons me. “Come, come, taste.” He puts a green, fresh almond in my hand. We walk by the café that has been given the name “Stars and Bucks”, but instead of this we drink sweet and spicy Arabic coffee from a friend of Don and buy fresh almonds for 3 shekel.

The tomb of Yasser Arafat

Another place that we can not skip, according to our guide, is the tomb of the Palestinian leader Yasser Arafat. According to some he is a terrorist, according to others a freedom fighter. Although the tomb may not be the first thing you want to see during your trip to Palestine, if you want to understand the state, you should also visit this place.

We leave our bags with the soldiers who stand guard and walk to the tomb where two of their colleagues are waiting. A tourist makes a quick selfie with them. Outside the tomb itself there is little to see.

On our way to Bethlehem we stop at a pastry shop. Have you ever tried ‘Knafeh’? The sweet but delicious dessert is a very popular serving during public holidays, but we also enjoy it today, together with an Arabic coffee.

Bethlehem itself suddenly feels unexpectedly touristy. It is probably the most visited city in Palestine. Christians go here to see the Nativity Church, built on the place where Jesus was born. The building is home to both the Roman Catholic Church, the Greek Orthodox Church and the Armenian Apostolic Church. Between two of the many services we can visit the place where Jesus was born. We are in a hurry, we have to get out before the next service starts, but we can take a quick look at the spot indicated by a silver fourteen-pointed star.

Walking through Bethlehem the city is in stark contrast to Ramallah. Clean streets, instead of the dirty market. Tourist shops instead of market stalls. Rows of tour buses with tourists who want to visit the Nativity Church. But also a contrast with Jerusalem, which is really only a stone’s throw away. No matter how western and quiet it seems right now, Bethlehem remains a conflict area and to get back to Jerusalem you will travel through various checkpoints and via roadblocks.

Banksy in Bethlehem: the Israeli Wall

Before we leave for Jerusalem we walk through the old city of Bethlehem and suddenly we encounter a controversial part of Palestine: the Israeli Wall or Israeli West Bank Barrier. A few meter-high concrete wall, built by Israel. The wall is almost completely covered with graffiti, political messages and stories from children and young people who share how they experience their lives in occupied territory, always surrounded by walls and borders.

Famous artist Banksy also left his mark here and created some graffiti. You can find his works throughout the city: the peace dove with a bulletproof vest and the man who throws a bouquet of flowers instead of a grenade.

Baksy’s graffiti on the walls attracts a lot of attention, just like the recently opened The Walled Off Hotel, where you can book a memorable overnight stay. With this grim hotel, Banksy sheds his light on the Palestinian and Israeli conflict and every part of the hotel has some or other politically charged meaning. The lobby is full of critical art. All rooms face the wall that divides Israel from the Palestinian territories.

Travel to the West Bank from Jerusalem

Traveling gives you the opportunity to expand your view. To form an opinion about destinations without copying them from books or the news, but to form them by experiencing and seeing it by yourself. The moment I decided to travel to Israel, I also decided I wanted to travel to the West Bank. I wanted to see both sides of the Israel-Palestine conflict, to understand it a bit better. But I also wanted to know what it is like to live in this region.

But how do you travel to the Palestinian Territory? It is possible to travel independently to the West Bank from Jerusalem. If you prefer traveling in a group, there’s another option. In Jerusalem I stayed at Abraham Hostel, that also organizes a Best of the West Bank Tour . This way you can travel with a guide who knows the area, the culture and history of this region, and gives you lots of background information about the places you visit. But, just as important, a guide also shows you what the occupation means for the daily life of the Palestinians.

Disclaimer: I participated in this tour by invitation of Abraham Tours. This article contains affiliate links. This means that if you make a purchase via one of these links, travelwriter.nl will receive a small commission at no extra cost to you.