In the footsteps of the gods, the Athens Marathon 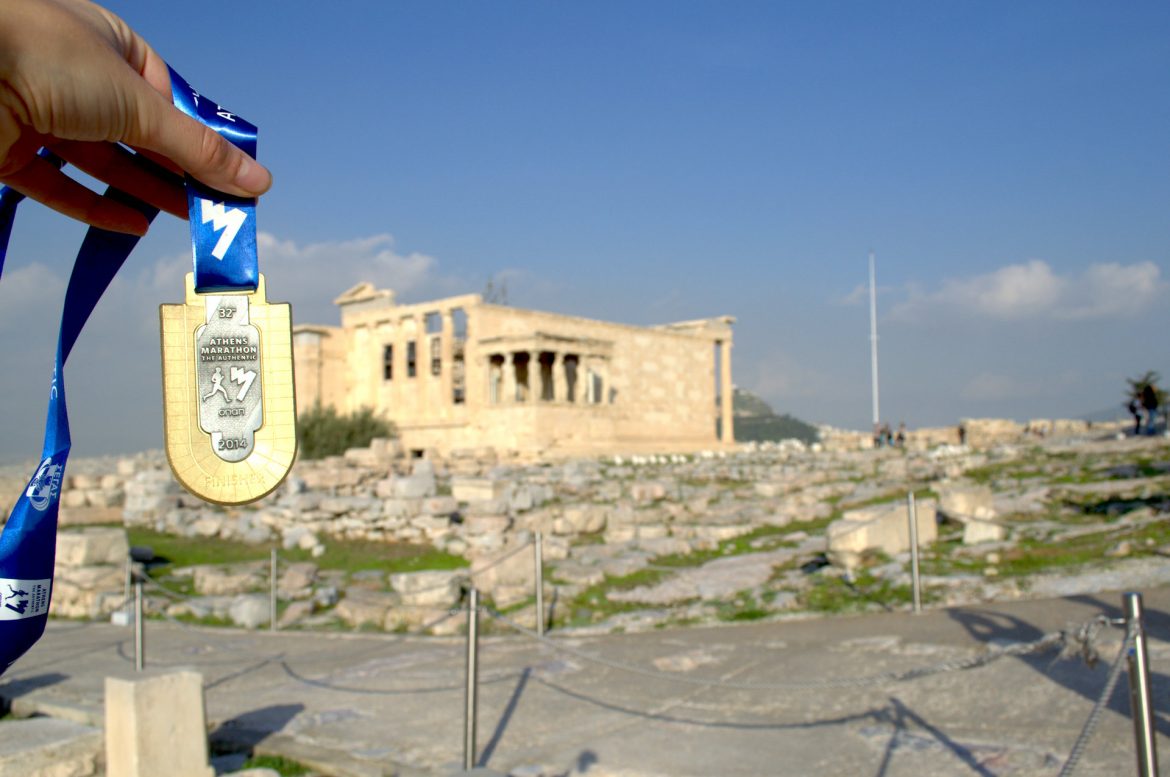 At the airport it’s clear why everyone is traveling to Athens. I am surrounded by well-trained men and women. Most of them wear sneakers, a shirt of this or that running brand, and I am surrounded by piles of sports bags. The stewardess on the plane also realizes it; she no longer asks if one would like a glass of wine, since the response is always orange juice or water. The flight to Athens is not populated by people who booked a trip for some sun during the last days of autumn, but with those who trained for six months, a year, or perhaps longer, to finish the Athens Marathon. In the footsteps of the gods.

I simply couldn’t get the thought of ever running a marathon out of my head. I run contests frequently, 10 or 15 K mostly, but the marathon always seemed far away. Until I decided that it was the perfect time; I signed up for the marathon. A choice that I have often regretted, especially during strenuous workouts. And yet here I am, in the stadium of the ancient Greek city of Marathon. Prior to the race all runners are asked to raise their right hand and then to recite the runner’s oath, about honoring the run and the other runners. To remind everyone that we run for the honor, to finish healthy and fair, not to run the fastest time or set a new PB time.

Then the starting gun sounds, and I start my 42.2 kilometers. A few kilometers after the start I run past the Olympic flame and I start thinking about the Greek soldier Pheidippides, who in 490 BC ran the 42 km from Marathon to Athens to bring news of the victory over the Persians at the Battle of Marathon. The current marathon follows the ‘original route’. From of the stadium in the ancient Greek city of Marathon to Panathinaiko, the Olympic Stadium of Athens.

The road to Athens

The road to Athens was long. Months of training preceded the race. Hundreds of kilometers of running in the hills surrounding Maastricht, to gain the right technique and the ‘running legs’. Thousands of kilometers on the road bike, also, for endurance. Hours figuring out what shoes I would wear, and what clothes. Examining where the drink stations are at the race track, and what I myself had to bring along, like sports drinks. And I’m not even talking about the races I ran in preparation. Yet it now seems so short. As I run through the old cities like Rafina and Pikermi I can almost feel the dust from an ancient Greek chariot passing descend on me. What is a few months, to the history that the whole route exhales?

Honestly, after the impressive start in Marathon, the road isn’t that beautiful anymore. You run a long, straight road to Athens. The first twelve kilometers is flat. You enjoy the spectators along the road, who applaud you and wave olive branches. But the nearly twenty kilometer climb that follows, is challenging. In a long, flowing climb you make quite a few altimeters. The temperature rises to 25 degrees Celsius and after five kilometers climbing I start feeling my thighs. Severe muscle acidification in my legs, a pain that will only get worse to the end of the race, until it is almost too much.

I count down the kilometers, because I know the last eleven kilometer will run downhill towards the finish. But after thirty kilometers of running nothing feels fine, not even a descent. I normally considerably accelerate in a descent, but the last kilometers of the marathon are more a matter of survival. At the many first aid points along the route it gets busier and busier, more and more runners drop down on the side of the road. The route is too long, too heavy, too hot.

But after 41 tough kilometers in the distance I can see glimpses of the Parthenon. In my mind I can see Zeus lying down, wrapped in conversation with other gods, while the goddess Athena beholds the runners under her feet. The last meters I can see the Panathinaiko Stadium. Only a few steps ahead of me, before I can enter the stadium and run the the last meters to the finish arch under the cheers of the spectators. The marathon ends in the marble Panathinaiko Stadium, built for the first modern Olympics in 1896. The stadium is located on the same spot where the remains of an ancient stadium were excavated, once used for the original Olympic Games in ancient Greece.

The moment I enter the Panathinaiko stadium and finish the race, is magical. With a final sprint I pass the finish line. At that moment you forget all the pain, fatigue, and you just remind yourself of finishing this tough race. I receive a commemorative medal while thousands of people sitting in the stadium cheer the runners.

Being part of history

According to legend, the very first marathon in the world took place on the exact same route where the current Athens Classic Marathon takes place. In 490 BC the Persian army invaded the small town of Marathon. In the Battle of Marathon that followed, the Greek army defeated the Persians, and the messenger Pheidippides was sent to Athens to bring the news of victory. The young Greek ran the 42 km to the capital as fast as he could, announced the message, and died. This is the same route the runners nowadays run.

The Athens Marathon probably isn’t the best race to run a personal record. The route is challenging with many altitude meters, and a long climb. But the historic significance makes the Marathon of Athens more than a regular race. The course gives you the possibility to challenge yourself and it is a victory on yourself to run the mythical distance. It is an heroic journey through history, whether you’re running a marathon in two or eight hours. During the Athens Marathon you take thousands years of history along. You walk in the footsteps of the gods.

The marathon takes place in November. More info on the marathon can be found on www.athensclassicmarathon.gr. I took part in a marathon trip via loopreizen.nl. For running a first marathon, like I did, the track is heavy. I ran a 4:26 hour marathon, which is a reasonable time, but to be honest I was happy just to reach the finish line. Out of the 13.000 runners about a 10.000 finished the race, which once again shows that you can’t ‘easily run a marathon‘, especially not this one. Good preparation is a must and I recommend everyone to run sufficient training kilometers, to make sure you have carefully measured running shoes, good coaching, and that you think of the oath; it’s all about the experience and whether you run the marathon fast or slow, reaching the finish line in Athens healthy and happy, that’s the most important! And it is for sure a great experience never to forget!

A myth for cyclists; cycling in Girona

I’m considering running this, thanks so much for sharing your experience!

You should! It’s a great experience.