Bats and copper: a visit to a former copper mine at Montecatini Val di Cecina 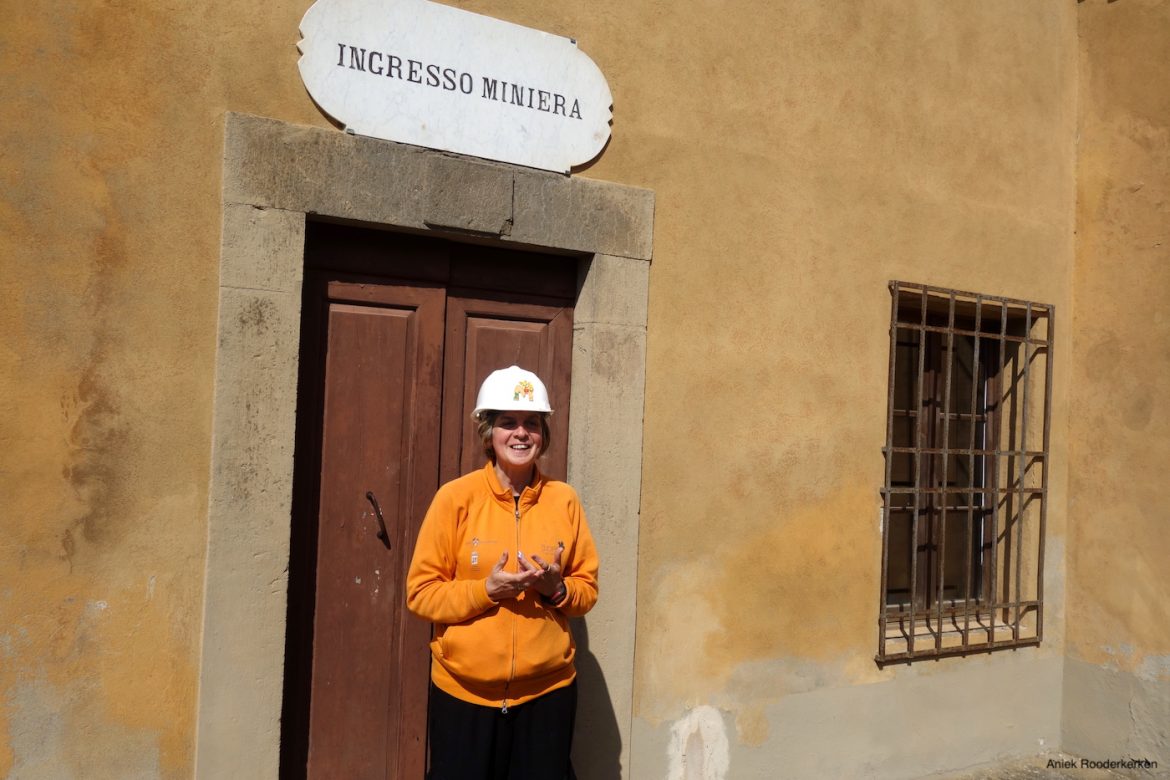 We walk through a pitch-black mine shaft. “Marcello!” our guide shouts suddenly. Marcello appears to be one of the bats who are fluttering around this place in peace. Because copper mining hasn’t happened here for more than a century. However, you can still enter the old mine shafts under the guidance of a guide. If you’re not scared of bats, that is! A visit to a former copper mine in Montecatini Val di Cecina.

Montecatini Val di Cecina is a small medieval village in the region of Pisa and not far from the city of Volterra, on the Etruscan Coast. The entire valley is rich in raw materials, such as copper and alabaster, that has been mined for a long time. This also makes it an interesting place for lovers of industrial buildings. For instance you’ll find a former copper mine in Montecatini Val di Cecina.

The Etruscans were the first to search for copper in this region, but certainly not the last. Caporciano, the copper mine that is located about a kilometre from the village, actually in the 19th century was the largest and richest copper mine in Europe. Nowadays the mine is closed, but you can still get a guided tour!

Today Lucia is our guide. She takes us to the mine shafts. She tells us how her father-in-law has worked in these mines. We are now at the entrance of the mine shaft. “Everyone who worked here had a necklace with a numbered pendant attached to it. At the entrance of the mine, the number was left to be collected again after the shift. That way they always knew how many people there were in the mines. “

She continues: “The miners worked for 12 to 14 hours a day in the darkness of the mines. Without knowing what time or what moment of the day it was. That’s why the walls at the entrance were painted dark blue, to get the men used to the dark when they entered and more importantly to the light when they came out of the mine again. “

The floor near the entrance shows a map that explains where the mine shafts were located. There was a total of 35.5 kilometres of shafts.

Few moments later we have entered the mine. “This is a geothermal area”, says Lucia (as I saw earlier at the Parco naturalististico delle Biancane), “so in the shafts you are closer to the magma and the geothermal heat. That means that where we are now it is 0 to 12 degrees. In the deeper shafts, 300 meters deep, it could easily reach 37 degrees Celsius, with a humidity of 70%. And can you imagine that after a shift of 12 to 14 hours, the miners only had 40 minutes to leave the mine. More than 1000 steps up, via wooden stairs. In the heat and later in the cold, just to be outside the mine in time. “

“Marcello, Marcello!” Lucia suddenly calls. “Marcello, Roberto.” To whom does she call? “Over there! There he flies. Marcello is the bat that lives in this part of the tunnel. ” It appears that countless bats live in the tunnels. But the first one you encounter is always Roberto.

More serious Lucia continues: “Life in the mines was heavy. It was dangerous work, bad for the health also. Many of the miners died around the age of 35.” She is clearly proud of her family who worked here. She tells us about the strong connection between the miners. “They worked in the dark, with only walls around them. With the lamps that the men go to take with them, they only had one meter of visibility. But if they stretched out their arms, with their hands they felt the men next to them. The men were never alone.”

“By the way,” she adds, “Women did not go downstairs. They said that it would bring bad luck.” She jokes: ” Or because the women were too smart. The women knew better than to enter the dangerous mines. They didn’t want to get down, so they told everyone that it brought bad luck, like with the ships. “

We are now back above ground. We have to get used to the light. Although nowadays the mines are closed, and most of the shafts can’t be visited anymore, some of the offices are still intact. So we’re going to take a look at them.

In the small tower that we see below us, there used to be six guards. “They watched, among other things, the seller and the broker who negotiated the copper. Next to the tower is the building where the owner of the mine lived, while the miners lived lower on the hill, in the village itself.” In the old buildings you can visit the Uffizio Amministrazione, the Laboratorio Chemico, where the copper was tested, and the offices of the director. At his desk we see a nice collection of original documents from the mining company. Payment registers, maps of the mines. A little further on is the tower of Pozzo Alfredo, with an original freight elevator.

The mining museum in Montecatini Valdicecina tells the story of the miners and shows the history of copper mining from 1827 until the closure of the mines in 1907. First we got a historical introduction of the complex. Undoubtedly the most fascinating part of the visit was the walk through the mine shafts.

The guided tour from Lucia was inspiring. Full of enthusiasm she tells about the mines, peppered with stories about family members who used to work here. You could listen to her stories for hours!

Do you also want to visit the museum and the mines? Check out the website of the former copper mines for the opening hours – which may vary per season – and the possibilities for (evening) guided tours.

Grodkällan: the most beautiful lake in Sweden