Biking along the boulevard: Tel Aviv by bike! 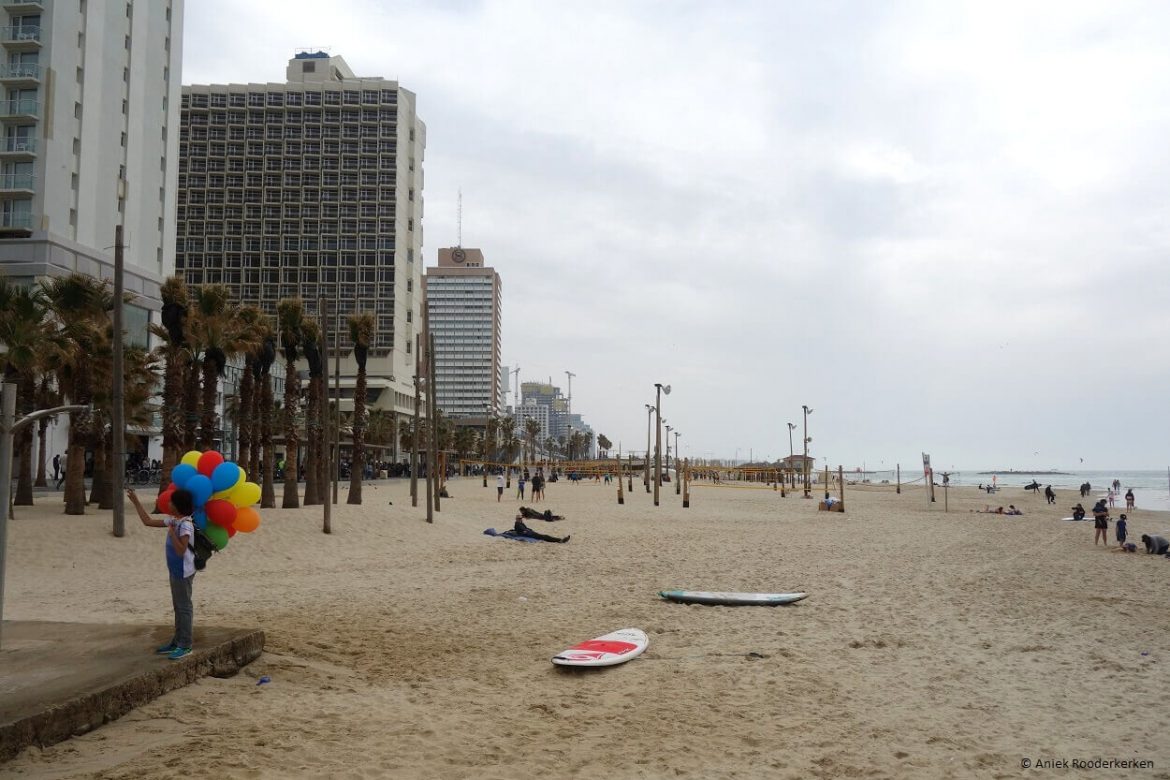 We cycle on a wide promenade, Rothschild Blvd. Between the rows of trees the Israelis cross the cycle path on small electric bikes. When I look around, I see how much Tel Aviv is a bicycle city. Earlier I decided I wanted to know all about Tel Aviv so I signed up for the Abraham Tours Tel Aviv Bike Tour. And here I am: cycling in the sun and in the middle of a modern metropole.

“The best way to explore a city is by bike”, tour guide Amit Musaei told us earlier. “But you need to know the right places to be able to explore the real Tel Aviv.” Tel Aviv is Israel’s second largest city. There is always something to do. Dine out in one of the many restaurants, go to fancy clubs of visit art galleries. Today the wide promenade is the place to be, so it seems.

Tel Aviv is a true cycling city. The city is flat and the bicycle paths make it easy to cycle through the various districts. Rothschild Blvd. has two rows of shady trees, with a bicycle path below the green roof of leafs, and many benches to sit down. Children play and parents sit down near a kiosk where you can buy street food.

Outside the city walls of Jaffa

“Tel Aviv was the second city district outside the city walls of Jaffa,” says Amit. Tel Aviv was founded in 1909 by 66 Jewish families from Jaffa. They bought the land and divided the various pieces of land with the help of shells on which the names of the families were written.

Many other buildings in the city look a bit neglected. Partly thanks to the UNESCO declaration, the buildings are now being restored. Once restored, they look beautiful. “Tel Aviv is built in such a way that the wind blows straight from the sea through all the streets. Most houses have flat roofs, so during warm summers you can sit in the cool rooftop areas.”

Cycling through Tel Aviv is much quieter than driving through the city by car or by bus. Certainly now it’s Shabbat. Buses in Tel Aviv do not run and few people drive a car during Shabbat. We cycle another few hundred meters and stop at Habima Square in front of the Habima Theater.

“This is the place where people meet. You could call it the Acropolis of Tel Aviv, a place of music and art. If they want to, people can perform here.” Whilst Amit tells us about the square someone starts playing on his saxophone. Next to the square we see the Helena Rubinstein Pavilion and the building of the Israel Philharmonic Orchestra. “Only a few years ago, this park was a ugly car park, and I mean really ugly. Now you see an artwork made by Kadishman that has become a symbol of the city.”

We get back on the bike and little later we stop at the Holocaust monument on Rabin Square, founded after World War II. “The Holocaust and Memorial Monument, made by Yigal Tumarkin.” Amit tells us.

“Do you see how the interior of the monument is yellow? It’s a reference to the yellow Jewish star. Yellow was a color of shame for the Jews. In the Middle Ages they had to wear a yellow hat so that they could immediately be recognized as a Jew.” The monument is an inverted pyramid, it feels small and restrictive. But as soon as you look up you see the blue sky and the sun.

“There are more reasons why this square takes an important place in this city.” We cycle to the corner of the square, to the Yitzhak Rabin Memorial. “Historically this is one of the most important places in the city. Premier of Israel Rabin was killed here on November 4, 1995.”

A little further the HaYarkon Park is the place where people go cycling, hiking or have picnics in the grass. “It is the Central Park of Tel Aviv. The vast park is divided in two by the Yarkon River.” We cycle along a tree where dozens of wine corks are hanging down. “According to the tradition when you have drank a bottle of wine in Tel Aviv, you hang the cork in this tree. Even though the tradition might as well started due to the cafe here on the corner of the street. “

It’s crowded in the park. Not surprising, on Shabbat. Nobody works and instead is with family or friends. Many people go to the beach, or to the park.

In the park we see a monument. High pillars with the names of persons killed in the various wars. “Do you see how the top of the pillars isn’t finished? It indicates how young most people were when they died during their duty of service. They were 18 years old, maybe 21. Their life was over before it even began. That’s why the monuments are rough, not completed. “

A little further down, Amit points to an arrow on a lantern. “From the Israel National Trail, a hiking route throughout Israel. In a few months time you can walk across the whole country. Or join a group of hikers for a few days.”

The beaches of Tel Aviv

Through the park we ride to the harbor and among the old expired power station. We stop at Pier23 and have a sweet drink made of passion fruit and strawberry. Everywhere in Tel Aviv, actually everywhere throughout Israel, you can buy fresh fruit juices on the street.

Meanwhile, Amit talks about the beaches. “Tel Aviv has been voted the most gay friendly city in the Middle East.” Even though I do not know which other city in the Middle East really can be listed as gay friendly. “Later on we ride along the gay beach and you’ll find separate beaches for men and women. They’re named Hilton, Gordon, Frishman, Jerusalem, Jaffa.” The beaches are a popular meeting place. People go swimming, jogging or play a game of Matkot. “This is our national sport. Nobody really knows the rules, but everyone plays it. Certainly in the weekends, on the beach.”

The last stop is Old Jaffa. It may call itself the oldest port city in the world. Old Jaffa is located at the end of the promenade. From here you can enjoy beautiful views over Tel Aviv, the Mediterranean Sea and the beaches. Via HaTachana, Tel Aviv’s old train station, Jaffa Tower, where also the free city walks through Tel Aviv start, and along Neve Tzedek we ride back to the hostel.

A bike tour is the best way to explore a city. In a few hours you will get a good overview of the city and you see the different neighborhoods. From the historic Jaffa to the artistic neighborhood of Florentine, where you will find graffiti on all walls.

You will see the most important places and monuments, and sitting on the bike you allready seek out a beach where later on you want to lie down in the sun. You get a good impression of how the city originated and what has happened in the last -turbulent- decades.

The Tel Aviv Bike Tour is organized by Abraham Tours. The bike ride starts and ends at Abraham Hostel at 21 Levontin St. Here you pick up the bike together with a helmet and lock. After the bike ride we were given the opportunity to use the bicycles for an extra couple of hours, so we could explore the city by bike on our own.

This article was written in collaboration with Abraham Tours and Abraham Hostels.  Like always, I only share my own opinion and experiences.

I’d love to do this tour when I’ll be in Tel Aviv this summer. Thanks for the info <3

I can’t wait to be in Tel Aviv, so exciting. Thanks for sharing this… wonderful write up and pics. Look forward to being there soon ?

Although i prefer walking whenever i am in a different city, biking is a good idea to cover more areas!

You get to go off the beaten path and see things no one tells you about!

I haven’t been to Israel yet but would so love to ?

This is very interesting – I had no idea that Tel Aviv is a biking city! I also didn’t know that the beaches there are amazing, I wish you had posted a few more pictures of the lovely coast 🙂 I’m very intrigued by Tel Aviv as a city to visit and Israel in general. Thanks for sharing this post !